Business out of cash! - learn about Invoice Discounting

Every investor's ultimate goal is to increase their money's value while keeping it safe. Thereby invoice discounting could come in handy if you require returns of profitable investments to come your way. Invoice discounting is a low-risk investment that has a low incidence of execution risk. In this blog we will discuss in particular about what invoice discounting is with all its relevant information which can be beneficial for you and your company in the long run. So exercising any delay, let’s learn.

What is Invoice Discounting?

The practice of utilizing a company's unpaid accounts receivable as collateral for a loan given by a finance business is known as invoice discounting. Because the finance business can change the amount of debt due as soon as the quantity of accounts receivable collateral changes, this is a very short-term kind of borrowing. The finance company has issued debt that is less than the total quantity of outstanding receivables (typically 80 percent of all invoices less than 90 days old). To avoid losing collateral, the finance business is usually not pickier than merely accepting a portion of all outstanding invoices, relying on a distribution of receivables among several clients.

Invoice discounting fundamentally accelerates cash flow from consumers, allowing you to get cash practically as soon as the invoice is issued, rather than waiting for clients to pay within their typical credit terms. The finance business makes money from the loan's interest rate (which is much above prime) as well as a monthly fee to keep the arrangement running. The amount of interest charged to the borrower is determined by the amount of cash loaned rather than the number of cash available to be loaned. If another lender already owns blanket title to all company assets as collateral on another loan, invoice discounting is impossible. In such cases, the other lender must relinquish its entitlement to the accounts receivable collateral and take a backseat to the finance business.

In Practice, How Does Invoice Discounting Work?

Due to the advent of numerous fintech (Financial Technology) lending sites, the method of choosing invoice discounting has been simplified in recent years. So, if you want to take advantage of invoice discounting for your business, you need to understand how the method works in practice, which is explained below.

Instance where invoice discounting can be used.

Invoice discounting is ideally suited for businesses with high profit margins, as they can easily handle the higher interest rates associated with this type of financing. It's particularly popular in high-profit companies that are rapidly expanding and need additional cash flow to finance expansion. For low-margin companies, on the other hand, this is not a good type of financing because the interest on the debt can negate any chance of making a profit. Because of the high fees associated with invoice discounting, it is usually a last-resort financing option. You'd usually use it only after being turned down for most other types of credit. The main issue in keeping invoice discounting as a funding option open is not including accounts receivable in the collateral for all other debt arrangements, as previously stated.

What are the various types of invoice discounting? 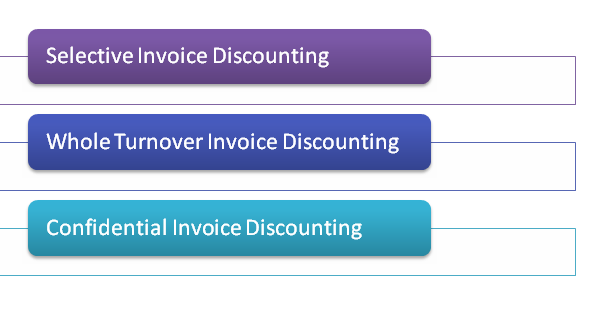 Single receivable invoices are sold to third parties to raise capital in a variety of ways, including spot factoring and selective invoice discounting.

With invoice financing, any invoice that a company produces over the course of its lifetime is discounted to collect funds, regardless of the company's needs.

The entire method of this form of financing is carried out in secrecy, as the name implies. It means that a company's suppliers or consumers are unaware that the company is raising capital against invoices before they are paid.

What are the benefits of Invoice Discounting? 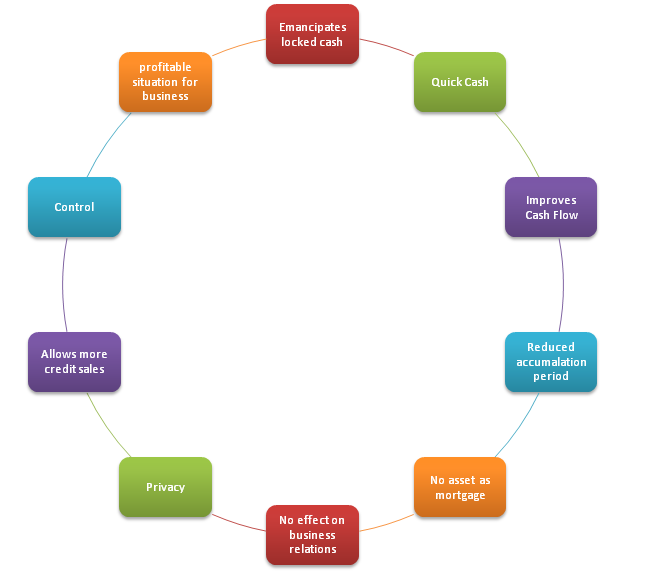 Invoice discounting is a much faster way to get cash than qualifying for a loan, when credit organizations or banks require a long time to assess the borrower's creditworthiness. When an invoice is issued, invoice discounting gives liquid cash to the business. By transforming sales receivables into cash, it increases cash inflow. The money might be used to boost sales, pursue growth, make capital investments, pay off essential obligations, and so on.

Because up to 85% of the advance invoice amount (receivable) can be converted into cash, invoice discounting improves cash flow and helps shorten working capital cycles.

The time it takes for accounts receivables to be converted into cash is referred to as the collection period. In most cases, the collection term is the credit time granted. Invoice discounting is a method of obtaining funds by taking a loan against the invoices that have been issued. As a result, a businessman can get his blocked cash without having to wait for the complete credit period if he pays a fee.

NO ASSETS AS MORTGAGE

Cash can be received without the use of any assets as collateral; just outstanding invoices are supplied for the transaction. Only account receivables are accepted as collateral by lenders. There is no commitment of inventory, property, or any other transportable object. As a result, businesses with a big number of pending receivables can discharge funds swiftly and easily.

NO EFFECTS ON BUSINESS RELATIONS

The seller's and buyer's business relationships are not harmed by invoice discounting. Discounting companies have no or very little communication with their customers. As a result, the buyer is certain that he will only be liable to the seller and not to third parties.

The privacy of invoice discounting can be guaranteed by the discounting houses. The company's borrowings against sales invoices do not required to be disclosed to suppliers or customers. Your clients are not aware of the arrangement between the financier and you/your company.

The corporation has the option of increasing sales through cash or credit. If an invoice discounting procedure is in place, credit sales may be converted into cash rapidly, and the company does not have to worry about the liquidity issues that occur with credit sales.

The sales receivables are still under the seller's ownership. He is the only one who can control the credit terms, negotiate new transactions, collect payments, and so on.

The borrowing company will be able to receive the funds it requires, while the consumer will be offered a credit period. This results in a win-win situation for both the company and its clients, allowing for the development of a healthy client relationship.

What are the disadvantages of invoice discounting? 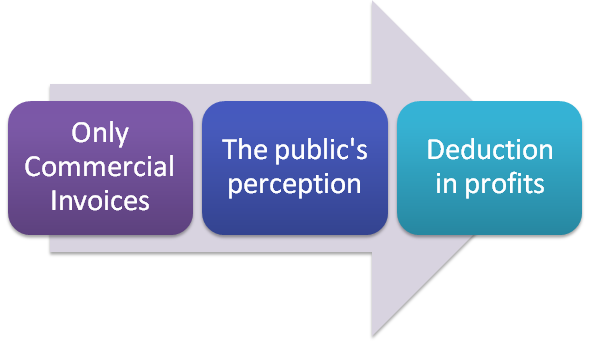 The above mentioned disadvantages are elucidated below for a better understanding-

The interest and processing fees that come with any business loan are a potential disadvantage of invoice financing. In the short term, a company's profits on bills that have been financed may be lowered. The potential of expansion and early access to funds, on the other hand, seem to outweigh this disadvantage.

How can you tell if invoice discounting is a good fit for your company?

With so many alternative credit choices now accessible, it's difficult to know which one is best, but invoice discounting may be a good fit if:

One of the most important factors to consider when choosing an invoice finance facility is whether or not you handle your credit in-house. If not, invoice factoring can be a better option. Discounting services are more commonly offered to established enterprises than to start-ups, which by definition lack solid turnover and credit management mechanisms.

Is Inflation Beneficial to Borrowers or Lenders?

Many economists agree that the money supply has an impact on inflation's long-term repercussions. In other words, in the long run, the money su .. Read More

What is an Export Document?

These are those documents which are required in order to fulfill the criteria to successfully export anything or commodities. The most commonly use .. Read More

What is a Performance Bond?

A performance bond is offered to one party in a contract as a guarantee against the other party's failure to fulfill the contract's obligat .. Read More

What are Trust Receipts?

The bank of UAE provides flexible repayment option that can range from one to four years.

Yes, the application for loan can be rejected if the applicant has not provided the reason for such loan with proper documentation.

No, your application for loan will be rejected if you apply for Multiple Loan.