Diesel vs Petrol vs Electric Car

Although it is widely expected that future vehicles will heavily feature electrification, especially after diesel's second major setback last year (the VW emissions scandal), they are being held back for two main reasons:

However, the large choice of power sources available makes selecting a new vehicle for business drivers and fleet operators rather difficult. To help you sort it out, we've put up a list of the benefits and drawbacks of the three main fuels now available: diesel, gasoline, and electricity. 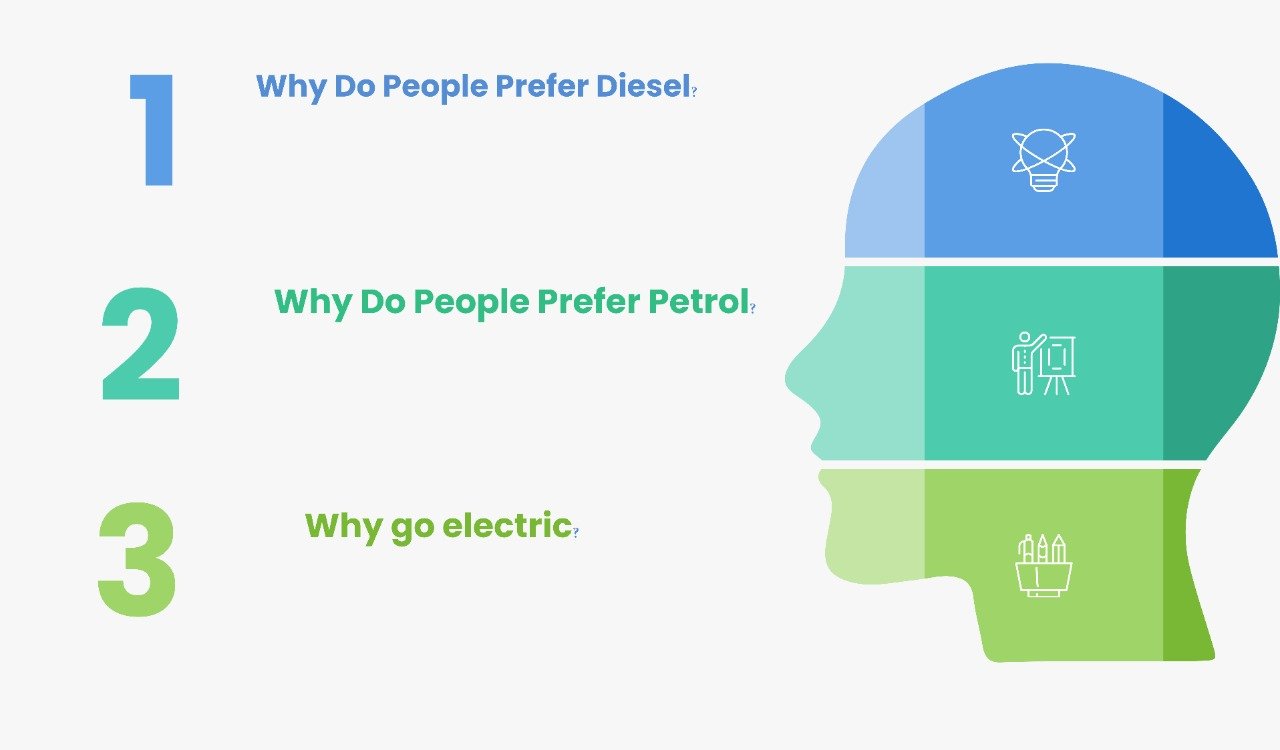 Why Do People Prefer Diesel?

Diesel cars have generally been more expensive to purchase than gasoline cars, and they emit greenhouse gases (NO2) and particulates that degrade the environment (considering the low-emission zones and other measures to be applied soon in the UK, this can be a big problem).

The cost of replacing or repairing diesel engines is higher than for petrol engines (even though diesel engines require less routine maintenance), increasing insurance costs by up to 15%. This is partly due to the increased usage of diesel particulate filters, which raises maintenance and repair costs (filters clog when driving at low speeds), particularly if you drive primarily outside of town.

Finally, because oil is not an infinite resource, the price of fuel is volatile and can rise at any time (in this case, you will also end up with useless vehicles that cannot run).

Why Do People Prefer Petrol?

Petrol vehicles depreciate the fastest (though opinions differ and there is no official evidence to back this up) and emit the most harmful greenhouse gases. The way gasoline cars deliver power differs from how diesel engines do. Unless the petrol automobile is turbocharged, you'll have to let the engine rev higher to shift gear. Diesel cars' maximum torque is available at lower revs, making for a more comfortable and relaxing drive. The price of gasoline fluctuates as well. Furthermore, petrol is a hazardous material to handle and store.

Electric automobiles are costly to purchase and take a long time to recharge (if you can find a recharging point nearby). Their range is also restricted, and since that electricity is typically provided by fossil fuel power plants, they are not a particularly environmentally friendly option. Aside than that, there aren't many models to pick from at the moment. Running a fleet of cars requires a fleet operator to make a number of challenging decisions, one of which is which type of gasoline to use. It all relies on the type of business you run, your long-term vision for the company, and the types of trips your drivers take.

With so many engine options available nowadays, it's no surprise that many people get perplexed when shopping for a new automobile. When it comes to determining which car to buy, it all boils down to your requirements. In cities with stop-and-go traffic, Electric vehicles are advantageous. In terms of towing capacity and long-distance range, diesels surpass all other classifications. Petrol automobiles are less expensive to buy at first and are the most prevalent type of vehicle.

A Vehicle Finance is basically a loan that is supported by any financial institution or bank in order to buy a vehicle. With a Vehicle Finance, you are not compensating on the devaluation of the vehicle like you do with a lease. You will be paying on the vehicle purchase price plus interest on it.

The bank or any financial institution provide finance for Vehicle for a period of 5 years for new or old cars. In case the car is much older than the time period is much shorter than the set limit.

Yes, the amount for down payment will be 20% of the car’s price.

Yes, this can be done as per the prevailing policy guidelines.

Dhanguard has an expert group of team that works for the satisfaction and ease of their clients in providing the required services. For acquiring hassle free services contact our well-knowledged team at Dhanguard.