A new generation of investors has adopted cryptocurrencies as a financial instrument as the investing landscape has changed and access to technology has increased. People are now working toward financial independence and early retirement (FIRE).

Cryptocurrencies are founded on the principle of decentralization, which is an important step toward democratizing wealth because it puts power in the hands of investors. Investors are drawn to crypto markets because of its quick rise over the last few years. In the last four years, Bitcoin has generated a stunning 1300 percent return on investment. Since 2017, Ether, on the other hand, has surged by more than 9000 percent.

Crypto exchanges like WazirX have made cryptocurrency investing extremely accessible to the general public. The registration process is straightforward, quick, and painless.

While cryptocurrencies have outperformed traditional investments, one of their downsides is the crypto markets' extreme volatility. It is critical for investors to get educated about cryptocurrencies and to be sceptical of those that are relatively new and offer too good to be true profits. Pump-and-dump scams abound on the internet, and they can be extremely convincing at first. Before investing in any financial instrument, cryptocurrency or otherwise, one must conduct their own research (DYOR). So what exactly is FIRE, be hooked to this blog till the end to find out all about it and other related aspects as well. So without any further ado, let’s learn!

Financial Independence and Retire Early (FIRE) is an acronym that stands for Financial Independence and Retire Early. The former entails being debt-free and owing no one anything. The latter, on the other hand, suggests retiring before the traditional retirement age and having enough savings to last a lifetime. On paper, this lifestyle revolution has gone popular among millennials, and putting it into practice is pretty simple. Amass, save, and invest your money while you're working in assets that can provide a passive income.

What role do Cryptocurrencies play in the implementation of FIRE?

In time, the passive income should be able to replace your monthly income, freeing you from full-time employment. Cryptocurrencies like Bitcoin, Ether, and others can now be used as investment assets with long-term potential. With their gradual adoption, there's no doubting that cryptocurrencies have created a bare minimum status quo, compelling every government in the world to reevaluate its position.

Five methods to get to FIRE using Cryptocurrencies 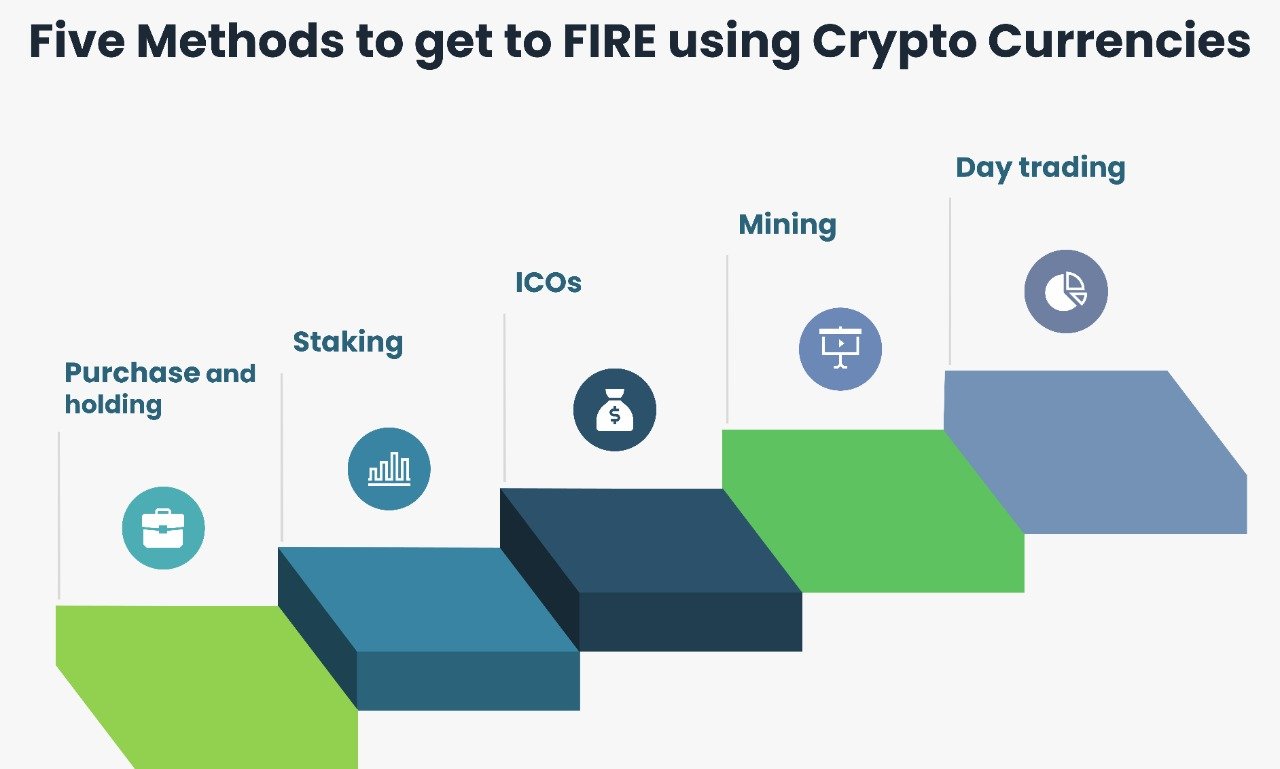 The most common method is to hold on to an investment for an extended period of time. The key is to disregard short-term fluctuations and trust the asset's intrinsic strengths, expanding usage, and future applications. While Bitcoin and Ether are not widely used as currencies today, they may gradually gain acceptance in the next years as a result of an ever-expanding universe of NFTs, QR-based payments, and other innovations.

Bitcoin has had a tumultuous history, but it has quickly regained its lost value and continues to soar to new heights. Crypto exchanges like WazirX, which is supported by Binance, the world's largest crypto exchange network, allow you to buy and hold crypto assets.

Coin staking offers currency holders some network decision-making power. You obtain the capacity to vote and earn money by staking coins. The blockchain, unlike mining, is based on Proof of Stake (PoS). Staking entails keeping money in a live wallet and earning extra coins in exchange for safeguarding a certain crypto network. As a result, unlike mining, it does not necessitate high-end equipment. Staking interest rates can range from 6% per year for well-known networks like Ethereum and Cardano to 100% for smaller networks like Pancake Swap and Kava.

Keep an eye out for Initial Coin Offerings (ICOs), which are the simplest method to get your hands on promising crypto-assets that are still in the early stages of development. ICOs have become a popular way for blockchain and cryptocurrency startups to raise cash. They're similar to stock market initial public offerings (IPOs), only you're investing in an idea, currency, and its applications rather than a firm.

It's a virtual mechanism that ensures coins are only given once a specified amount of labour is completed, preventing blockchain oversupply. Crypto-assets can be mined using cutting-edge machinery, just like traditional gold. Mining pools are one way to make money from crypto mining. It allows miners to pool their resources, increasing their computing power while dividing the difficulty, cost, and reward of Bitcoin. F2Pool, Poolin, and BTC.com are just a few of the well-known Bitcoin mining pools around the world.

While investing takes time and patience, trading is a high-octane, fast-paced means to gain money with equally high hazards. It's usually done on a short-term basis, and traders keep an eye on news, events, and market activity at all hours of the day and night for signs that an asset's price might change. It's the same as actively trading on the stock market, but instead of equities, we're trading crypto assets. The significant volatility (ups and downs) of cryptocurrency trading gives the opportunity to profit from large payouts.

Thus we can conclude with the fact that Cryptocurrencies have taken over the investment market to a great extent. The returns on the investments in Cryptocurrencies are heavily promising because of which everyone wants to be a part of it and wants to secure a good amount of profits through them. We hope this blog provided you with incite full information. For more information on other related aspects, feel free to checkout our Website as well.