This is, without a doubt, the million-dollar question. Before proceeding further, let's have a look at the background. How did we arrive at this point?

The LTV ratios for first mortgages for homes worth up to AED 5 million were capped by the Central Bank in 2014 at 75 percent for properties valued up to AED 5 million and 65 percent for homes priced exceeding AED 5 million. Second mortgages were limited to a maximum LTV of 60%. For both first and subsequent mortgages, UAE nationals would be entitled for a 5% bonus. LTV ratios were limited to 50% for properties under construction (with the final 50 percent being financed).

Some individuals may not recall that the Central Bank merely announced a drop to 50% LTV across the board only a year ago. After a period of consultation and the realisation that it was a more stringent limit than was required, it was changed to the current levels. Other measures adopted by the Dubai Land Department included increased debt servicing ratios and mortgage charges, as well as an increase in transfer costs. I'll solely focus on the LTV ratios for the purposes of this post.

What was the purpose of this?

Following the 2008 catastrophe, the market quickly rebounded to 2007 levels following a brief period of correction. Increases of more than 30% were observed across the market in 2013, particularly in Dubai.

These steps were made as part of the UAE's long-term strategy to calm the property market and prevent the cost of living from rising too high. This was critical in ensuring the UAE's competitiveness with foreign corporations and investors.

This has had the desired effect to a larger extent. Since 2014, property values have dropped by 25-40%, according to reports (varying dependent on area and report you read). Rents, on the other hand, have decreased by roughly 30-35 percent on average.

This brings us back to today's topic of whether or not the LTV ratios will be increased. I certainly hope so, as do most mortgage professionals, real estate agents, existing owners, and anybody else interested in the asset values of real estate in the UAE. However, whether this should be done and when it will be done are two different questions.

If the major purpose of lowering property values was to make the country more appealing to foreign investors and businesses, it's vital to recall that the 35 percent to 40% drop in property values was countered by a rise in the value of the US dollar versus most other currencies over the same time period. Also, given the drop in the value of existing properties on their books, we don't know if UAE lenders will be ready or able to expand their risk in the market.

Step taken by the Central Bank

To aid in the revival of real estate market values, the Central Bank will ease or amend the LTV requirements at some point in the near future. Other techniques for stimulating a market recovery are also accessible. Taking mortgage security against real estate assets, for example, is now confined to regulated banks and lenders in the UAE. Allowing non-traditional lenders and other ways of leveraging into the market will undoubtedly aid long-term growth and stability. These variables, together with a likely drop in the value of the US dollar, could be crucial in the UAE property market's next phase of growth.

Inserted table is an overview showing the LTV ratios set by the Regulations as discussed above. 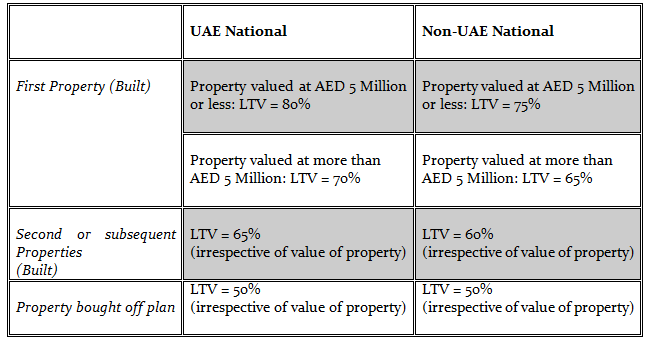 The Regulations mandate that mortgage lenders maintain a board-approved list of independent valuers for the purpose of property appraisals. In each scenario, the valuer must be an adequately qualified third party who is unaffiliated with the seller, borrower, developer/contractor, or the loan determination process.

The maximum length of a mortgage is set at 25 years, and the maximum age limit of a borrower at the date of the last payments due on the loan is 70 years for UAE nationals and 65 years for non-UAE citizens, according to the Regulations (or 70 years if self-employed).

What did the Regulation say?

The Regulations require mortgage lenders to implement appropriate processes and procedures to ensure that correct information about a borrower's income is collected in order to establish the borrower's ability to repay the loan. For this aim, loan providers must create standard Debt Burden Ratio (“DBR”) calculation templates. The DBR cannot be higher than 50%. Furthermore, the maximum funding amount authorised for UAE nationals is set at eight times their yearly income, while for non-UAE nationals it is set at seven times. Any promotional or introductory interest rate supplied by the lender should be ignored when calculating the DBR.

In conclusion, many believe that further decreases are anticipated in the near future. This will continue to provide opportunities for those who have the financial resources and trust in Dubai's long-term prospects. For those who act now, this could be a once-in-a-lifetime opportunity to maximise returns during the next development cycle. The property market in the United Arab Emirates (UAE) has seen a lot of changes in the last decade, with a slew of new legislation, initiatives, and real estate projects unveiled. The UAE real estate industry has been marked by a great deal of positivity and progress over the years.