A Fool Proof Guide to US Dollar Pegged with UAE Dirhams

The method of pegging local Gulf Cooperation Council (GCC) currencies to the dollar has been around for a long time. Saudi Arabia and the United Arab Emirates, for example, have been pegged to the US dollar since January 1978 and June 1986. While this has been going on for a long time, the complexities of the UAE's future must be considered, especially in light of the country's growing economy. Some studies in 2018 concluded that it was time to reconsider the dollar's peg, assess the volatility, and move on. The key explanation for the peg is that oil exports are traded in USD, making oil-related transactions more convenient and thus helping to stabilize the UAE economy.

What are the Components of Currency Peg?

The Components of Currency Peg are as follows- 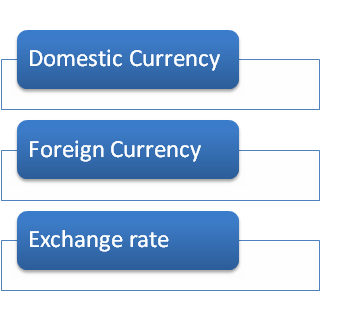 This is described as a legally appropriate unit or tender that is used as a monetary instrument of exchange in one's own or domestic country. This is the only currency that can be used as a medium of trade throughout the country's borders.

This is a legal and legitimate tender with value outside the country's borders. The domestic country can keep it for the purpose of monetary exchange and recordkeeping.

This is known as a fixed exchange rate between two countries that is used to complement trade between them. The central bank of such a system aligns its domestic currency with the currency of the other nation. It aids in keeping the exchange rate in a manageable and narrow range.

Which types of Currencies are Pegged?

The following is a list of some of the major national economies and their present exchange rates against the US dollar. 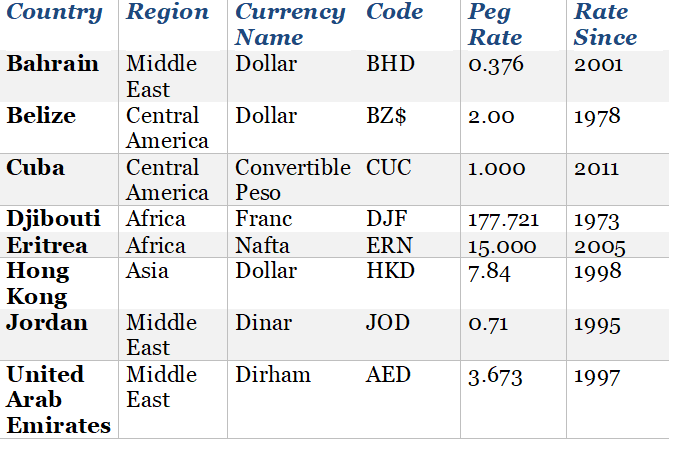 How USD Pegged with Dirham Helps in Exchange Rate Of UAE?

The following are the few major advantages which could supplement the exchange rate of UAE when the US is pegged with Dirham:- 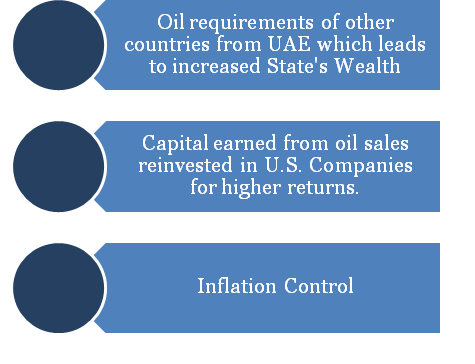 Since oil is sold in dollars, the Gulf Cooperation Council's oil-exporting nations must peg their currencies to the dollar. As a result, their sovereign wealth funds contain vast sums of money. To receive a higher return, these petrodollars are often invested in U.S. companies. The dollar pegs have largely performed well for them as the sole nominal anchor for inflation control.

How does Fixed Exchange rate works in UAE?

In order to understand the above question, we need to clear our concepts about what Fixed Exchange Rates are:-

A fixed exchange rate is one in which one country's currency is connected to another country's currency or a widely traded commodity such as gold or oil. Countries nowadays typically connect their currencies to their trading partners, such as the US dollar. The United Arab Emirates, for example, pegs its currency, the UAE dirham, to 0.27 US dollar. In other words, you will still get 3.67 dirham for 1 USD which is done to keep the oil trade between the two countries stable.

How does Fixed Exchange rate work in UAE?

A fixed or pegged exchange rate involves harboring the domestic currency to a foreign currency so that a constant exchange rate can be ensured. One of the key facts about the Fixed Exchange Rates is that it promotes international trade by obliterating the exchange rate risks.

The UAE's currency is pegged to the US dollar at a fixed rate of 3.6725 to 1. Since oil and gas products are valued in US dollars, this exchange rate regime has enabled the UAE to reduce the volatility of its hydrocarbon export earnings. Furthermore, by eliminating exchange rate uncertainties, the fixed exchange rate has helped the country boost investor trust. The fixed exchange rate, in particular, forces the UAE to maintain interest rates equivalent to those in the United States in order to avoid speculative capital flows.

There are a number of reasons why a bank will call you or demand your physical appearance in their branches to fulfill some of the formalities. And .. Read More

To ensure that copies submitted are accurate, exact, complete, and unaltered, true copies (or certified copies) of original documents are frequentl .. Read More

Yes, a foreign entity can open business account in the UAE. The registration of any organisation in the UAE is generally an easier and cost-effective way.

The requirement for opening any bank account in the UAE vary from one bank to another. Although, the existence of a major director or shareholder is generally required.

A limited company should have a dedicated bank account because they have a separate legal entity.

The benefits of having business account includes tracking of the expenses, easy calculation of the tax liabilities as well as management of cash flow.

Yes you can open a business account in various major currencies of the world other than the UAE dirhams.

Every bank has a unique internal procedure and timetable for opening accounts. For an LLC or a Free Zone company, obtaining a bank account in the UAE normally takes 2 to 4 weeks.