Interest Rate on Loans in UAE: Recent Development in the Law

In the United Arab Emirates (“UAE”), the power to charge interest, whether simple or compound, has always been a source of ambiguity for contracting parties. However, in 2018, the UAE passed Federal Law No. 14 on the Central Bank and Organizations of Financial Institutions and Activities (“New Banking Law”), which clarified the position of the UAE Central Bank (UAE Central Bank) on banks and financial institutions charging compound interest on credit and lending facilities, among other things.

The relevant sections of the New Banking Legislation, as well as broader developments in UAE law, are examined in this article, which have provided banks, financial institutions, and contracting parties with additional clarity on how to charge interest on money due in the UAE.

Developments in the Law

Similarly, while the capacity of banks and other financial organisations to charge compound interest has been mostly discretionary, the introduction of the New Banking Law has provided some clarity on their authority to charge interest under more complex loan facilities.

The New Banking Law puts restrictions on financial institutions in respect to their actions as lenders and deposit takers, in addition to the UAE Central Bank's broader responsibility in directing monetary credit and banking policy in the UAE. Article 121 of the New Banking Law, for example, expressly bans banks and financial institutions from collecting interest on interest that has already accrued (compounding) on any credit or funding facilities provided to consumers. Although it is unclear whether this provision will allow for interest capitalization, the New Banking Law's implementing regulations (which have yet to be issued) will be crucial in providing details on how these provisions will be implemented in practise and the UAE Central Bank's regulatory powers over banks and financial institutions in the UAE. 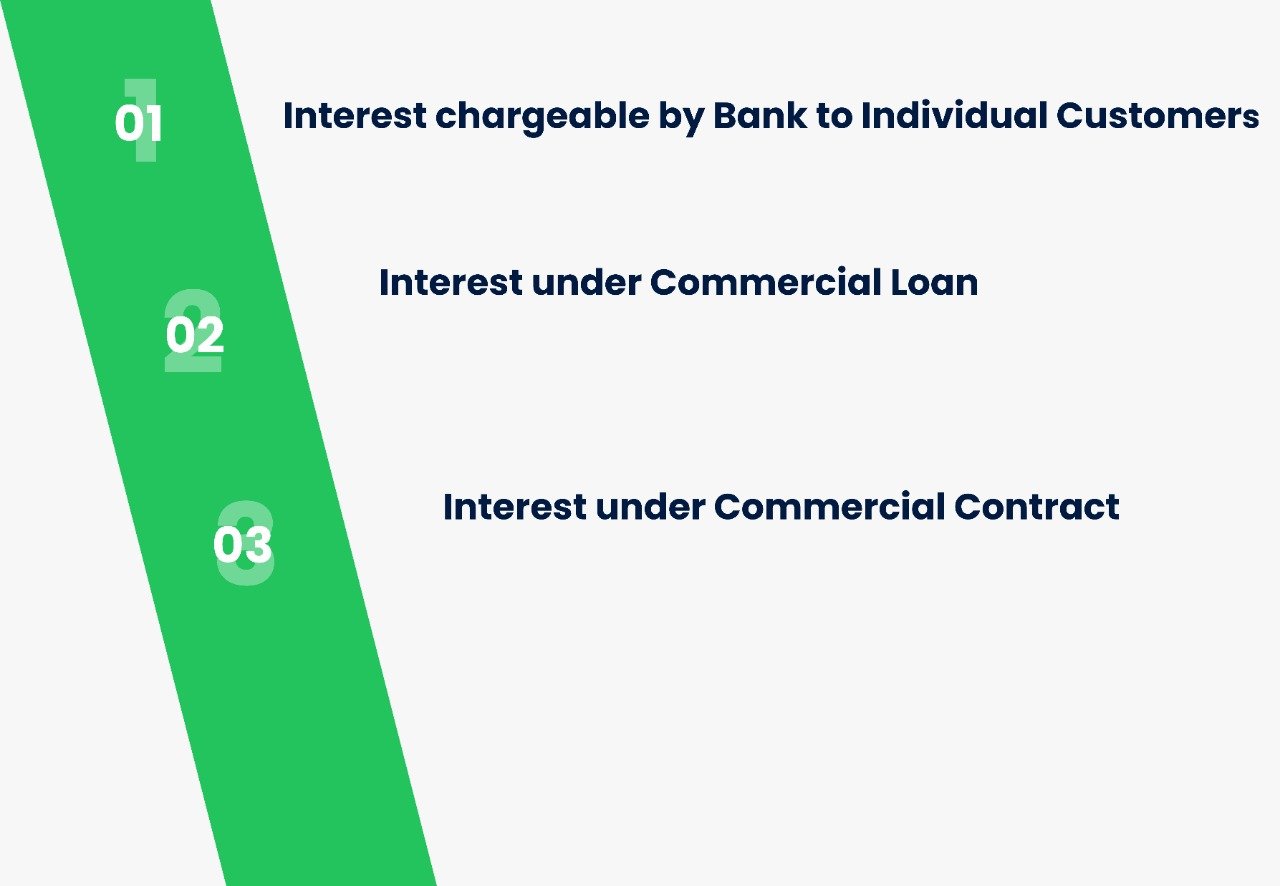 Article 409 of the UAE Commercial Code expressly permits the levying of simple interest on loans provided by banks to individual customers, subject to the New Banking Law's position on compound interest in sophisticated lending facilities (including personal loans, car loans, overdraft facilities on current account and credit cards, wherein, banks must declare the rate of interest they intend to charge to the Central Bank). Prior to advertising and publishing the chargeable interest, each bank must get written approval of the rate of interest from the UAE Central Bank. While charging compound interest on loans and credit cards to individual consumers is a well-established and prevalent practise in the UAE, it is nonetheless unjustified under UAE rules and regulations.

The provisions of Articles 61 and 62, as well as Articles 76 and 77, of Federal Law No. 18 of 1993 in respect of Commercial Transactions, established the lender's right to charge interest on a commercial loan at the agreed rate in the contract, or, if there was no agreement, at the current interest rate in the market at the time of dealing. Furthermore, if the rate is established in the contract and the debtor is late in paying, the delay interest will be computed on the agreed rate until the debt is fully paid.

In other words, commercial banks and financial transactions in the UAE are allowed to charge simple interest on banking facilities and loans at agreed-upon or applied rates, although the rate cannot exceed 12 percent per year until the loan is fully paid off. This is in addition to charging the lender delay interest, which accrues from maturity dates unless otherwise agreed, as compensation for the delay without the necessity for the lender to prove any sustained damages as a result of the delay.

Interest is generally charged in commercial contracts as a kind of compensation for late payment. As previously stated, Article 88 of the UAE Commercial Code allows a debtor who has delayed payment to be forced to pay the creditor whatever rate of interest agreed upon by both parties as compensation, as long as it does not exceed the 12 percent per year maximum. Even though the UAE Commercial Code refers to this delay interest as "compensation," Article 89 confirms that this provision is not conditioned on the creditor establishing that he has suffered damages as a result of the delay.

Furthermore, Article 91 of the UAE Commercial Code states that a creditor may claim supplemental damage in addition to the delay interest, and that the creditor is not necessary to prove that the damages caused by the stated interest were caused by the debtor's deception or gross failure.

However, the UAE Commercial Code does not clarify whether “any reference to interest” includes compound interest, or whether compound interest conditions in a loan or commercial agreement are authorised. The Dubai Court of Cassation, however, concluded that any provisions “contrary to public order,” which was interpreted to include those stipulating compound interest, will be regarded null and void by the UAE courts, based on Sharia Law principles and the UAE Civil Code. Similarly, in any business setting, the UAE Courts will give effect to contractual terms for payment of interest, provided that these clauses do not exceed the 12 percent per year maximum and are not in any way expressly adverse to ‘public order.'

The New Banking Law puts restrictions on financial institutions in respect to their actions as lenders and deposit takers, in addition to the UAE Central Bank's broader responsibility in directing monetary credit and banking policy in the UAE. Connect with Dhanguard to know about your interest rates.

Is Inflation Beneficial to Borrowers or Lenders?

Many economists agree that the money supply has an impact on inflation's long-term repercussions. In other words, in the long run, the money su .. Read More

What is an Export Document?

These are those documents which are required in order to fulfill the criteria to successfully export anything or commodities. The most commonly use .. Read More

What is a Performance Bond?

A performance bond is offered to one party in a contract as a guarantee against the other party's failure to fulfill the contract's obligat .. Read More

What are Trust Receipts?

The bank of UAE provides flexible repayment option that can range from one to four years.

Yes, the application for loan can be rejected if the applicant has not provided the reason for such loan with proper documentation.

No, your application for loan will be rejected if you apply for Multiple Loan.