People go to banks when they need capital or financial assistance in order to achieve a specific financial target. However, there will be periods when the bank itself requires funds. If a bank's funds are in short supply, it may borrow money from another bank that is financially sound. When it comes to interbank loans, however, interest rates differ. And in the UAE, these interest rates will be determined by the EIBOR system, which governs and regulates such transactions. EIBOR is a derivative of LIBOR, which stands for London Interbank Offered Rate and was formerly known as BBA Libor – British Bankers Association LIBOR. The British Bankers Association is in charge of this. In this blog you will get to know about the concept of EIBOR & LIBOR in relation with Home Loan.

First let us explain the concept of EIBOR.

The EIBOR is also the reference rate used by borrowers and lenders in Dubai and the neighbouring Emirate kingdoms to perform financial transactions such as mortgages, personal loans, and car loans. 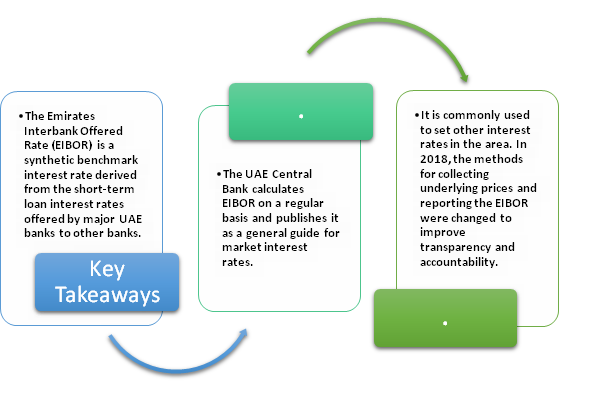 The EIBOR is a daily benchmark interest rate released by the Central Bank of the UAE that represents an average of rates provided by major UAE banks for short-term funding loans to other banks, similar to the London Interbank Offered Rate (LIBOR). It is calculated using the average interest rates at which UAE banks offer to lend unsecured funds to other banks in the wholesale money market of the United Arab Emirates dirham (AED).

EIBOR is the average market interest rate for short-term bank borrowing and liquidity management in the interbank marketplace for the regional banking industry. To put it another way, if a bank wants funds or has a liquidity problem, it borrows from another bank, and the interest rate on the loan is then integrated into the EIBOR when the lender announces their offered rates the next day. Other transaction rates, such as mortgages, consumer loans, and Islamic finance, are then calculated using this rate as a benchmark.

Interest Rates of the EIBOR

The EIBOR UAE interest rates fluctuate regularly, with the exception of Fridays, Saturdays, and national holidays. Banks on the committee must have their rates by 11 a.m. GST. If a bank fails to provide a rate, the rate from the previous day is used as input. A minimum of eight banks should be able to provide rates on a daily basis. The previous day's rate is carried forward if the number of banks offering the day's rates falls below eight.

These interest rates apply not only to interbank lending, but also to people looking for a mortgage loan in the UAE. The interest rate will remain the same, but banks will add a percentage for their own benefit.

What is a LIBOR mortgage?

A LIBOR mortgage, like a variable rate mortgage, uses a 'roll-over credit' arrangement to make periodic interest rate changes at the end of each agreed-upon roll-over term. The London Interbank Offered Rate, abbreviated as LIBOR, is a benchmark rate for short-term loans on the money market that are accessed by central banks, insurers, and investment firms. In contrast to a variable mortgage, banks only change a customer's interest rate at the end of each agreed-upon LIBOR mortgage period, saving borrowers a significant amount of money.

Understanding the Concept of LIBOR Mortgage

As compared to the costs of fixed- and variable-rate mortgages, a LIBOR mortgage has become an appealing alternative form of funding real estate in recent years. Average LIBOR mortgage interest rates have consistently been one percent lower, or even more, since the low-interest period began in 2013.

The LIBOR mortgage interest rate is made up of the LIBOR rate plus a margin determined by the individual banks. Despite the fact that the LIBOR is revised regularly, these micro-adjustments have no effect on the mortgage rate. Customers, on the other hand, can select the time intervals at which LIBOR changes are made, which is normally every 1, 3, 6, or 12 months. A LIBOR mortgage deal usually lasts two to six years.

When does it make sense to take out a LIBOR loan?

Borrowers are not required to wait until the contract expires if interest rates rise during the lifetime of a LIBOR mortgage. Two options for avoiding sharply rising interest rates are an Interest Cap or a Switch Option. The Interest Cap functions like an insurance policy: the borrower can secure a maximum limit at which the interest rate will be "frozen" in exchange for a fee charged to the bank lender when the contract is drawn up. A Switch Option allows a LIBOR mortgage to be converted to a fixed-rate mortgage in exchange for a premium.

In the United Arab Emirates, all mortgage lenders base their interest rates on EIBOR, or the Emirates Interbank Offered Rate. This rate is the norm paid by UAE banks when lending money to a competitor institution. Since banks always need to borrow money from one another, the market would suffer from volatility and stifled growth if there was no unifying rate in place to help regulate these transactions.

Mortgage lenders in the United Arab Emirates use EIBOR as a benchmark for determining their own interest rates for borrowers, while those in Europe look to EURIBOR for guidance and those in the United Kingdom depend on LIBOR. Despite the fact that the three rates are based on similar models, they are entirely independent, and events that affect LIBOR or EURIBOR do not affect EIBOR, and vice versa.

Changes in Interbank Rate Calculations Around the World

The UAE Central Bank modified the way it measures and publishes EIBOR in 2018, requiring participating banks to maintain more records and be more accountable. The move was made by the Central Bank to improve the accuracy and transparency of EIBOR calculations. This reform is part of the global interest rate changes made in the aftermath of the LIBOR fixing scandal in 2012.

Note -: Banks can stop writing contracts using LIBOR by the end of 2021, according to a Federal Reserve announcement made in November 2020. After December 31, 2021, the Intercontinental Exchange, which is responsible for LIBOR, will stop publishing one-week and two-month LIBOR. By June 30, 2023, all LIBOR contracts must be completed.

The EIBOR (Emirates Inter Bank Offered Rate) is often used to benchmark variable mortgage rates or rental rates for Ijara leasing agreements.The EIBOR system is based on LIBOR, the London Interbank Offered Rate, which was created in the 1980s to standardise market trading in the financial centre. EURIBOR, a third rate, serves the same function in much of Europe.Share your concern with us in case you have any doubt regarding this topic