The right place to get to know about the ins and outs of Ethereum and its investment capabilities.

Ethereum is a currency which is decentralised open-source blockchain that supports smart contracts. We at Dhanguard operate with a sole objective of providing you with top tier information about Ethereum.

Cryptocurrency is a term that almost everyone who spends any time online has heard about. Bitcoin and other decentralized digital currencies have made cryptocurrencies, and by extension the blockchain, a hot topic for discussion, with Ethereum being second of the most popular. Ethereum, on the other hand, isn't just another cryptocurrency it's a decentralized computer network that runs on Ether, a cryptocurrency. Ether has a specialised application rather than simply being a substitute for the dollar, euro, or pound. Ether is a cryptocurrency that can be sold for cash and is one of the most valuable cryptocurrencies. However, referring to it just as a currency alternative leaves out a lot of what it's really for. So let’s dive deep and learn about the basics of Ethereum and its significance in Crypto world.

Ethereum is a blockchain platform that has its own money, Ether (ETH), as well as its own programming language, known as Solidity. It can be classified as a decentralised public ledger for validating and recording transactions as a blockchain network. Users of the network can create, publish, monetize, and use applications on the platform, and they can pay with Ether, the network's cryptocurrency. Insiders refer to the network's decentralized applications as "dapps." To utilize dapps, Ethereum users must pay a charge. The fees are referred to as "gas" since they vary based on the amount of processing power utilized.

Ethereum was intended to allow developers to design and publish smart contracts and distributed applications (dapps) without the danger of downtime, fraud, or third-party interference. "The world's programmable blockchain”, as Ethereum describes itself,  differs from Bitcoin in that it is a programmable network that acts as a marketplace for financial services, games, and apps that can all be purchased using Ether money and is free of fraud, theft, and censorship.

Ethereum, just like Bitcoin, is an open-source project created by a large number of people all around the world. Ethereum, on the other hand, was created to be adaptive and versatile, unlike the Bitcoin system. On the Ethereum platform, it is simple to construct new applications, and with the Homestead release, it is now safe for anyone to utilize those applications.

How does Ethereum operates?

Ethereum integrates many features and technology that Bitcoin users will be acquainted with, while simultaneously offering many new features and breakthroughs. The account is Ethereum's core unit, whereas the Bitcoin blockchain was simply a record of transactions. Every account's state is tracked on the Ethereum blockchain, and all state transitions are transfers of value and information between accounts. There are two types of accounts: personal and business.

The primary difference between these for most users is that human users control EOAs since they have access to the private keys that grant authority over an EOA. Contract accounts, on the other hand, follow their own set of rules. If they are managed by a human user, it is because they are programmed to be controlled by an EOA with a certain address, which is in turn controlled by whoever controls the EOA's private keys. Code in a Contract Account Programmes that execute when a transaction is made to that account is referred to as smart contracts. By deploying code to the blockchain, users can build new contracts.

Users must pay tiny transaction fees to the network, much like in Bitcoin. This protects the Ethereum blockchain from computing activities that are either trivial or harmful, such as DDoS attacks or infinite loops.

The basic features of Ethereum are as follows 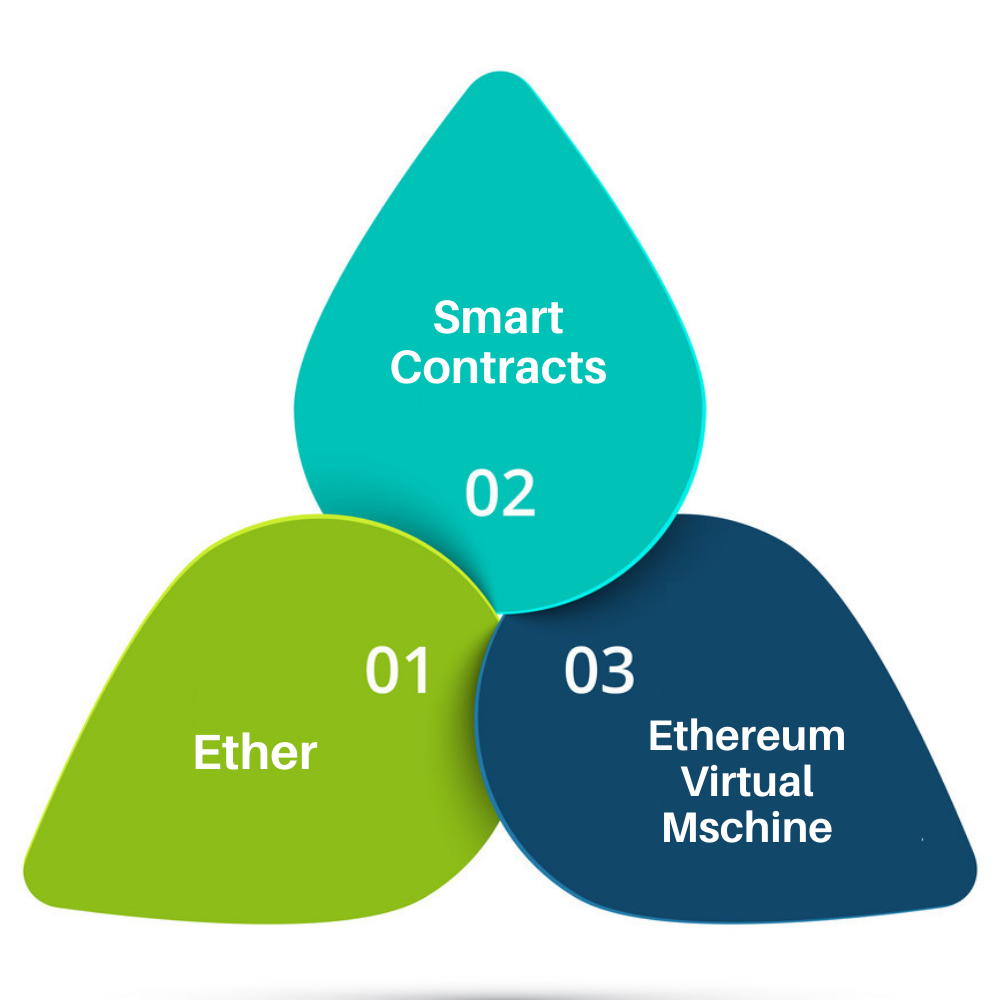 Smart contracts are changing the way traditional contracts function, which is why you should read this Ethereum lesson to learn more about them. A smart contract is a simple computer programme that allows two parties to exchange any valuable item. It might be cash, stocks, real estate, or any other digital asset you desire to trade. On the Ethereum network, anyone can create a token. The contract is basically made up of the party’s mutually agreed-upon terms and conditions (peers).

EVM is a runtime environment for developing and deploying Ethereum-based smart contracts, as discussed before in this Ethereum tutorial. EVM is the engine that deciphers the language of smart contracts written in Ethereum's Solidity programming language. You can install your stand-alone environment, which can act as a testing and development environment, and test your smart contract (use it) "n" times, verify it, and then release it on the Ethereum main network once you are pleased with its performance and functionality.

Should you invest in Ethereum?

Ether's worth as a financial investment, like everything things, isn't as black and white as predicting whether it will rise or decline. If proof-of-stake becomes the dominant model in 2021, Ether prices may fall as a result of the move from mining payouts to yearly dividends for stakeholders under proof-of-stake, which may alienate some users and cause them to sell coins due to uncertainty. Many small-time investors will feel left behind when it costs roughly $1 million to buy a voting stake in the future Ethereum blockchain. All of this is irrelevant if you're solely interested in Ether for its financial value. It's a different storey if you're interested in Ether for its practical applications.

Although before investing you should probably consider the below mentioned advantages and risks involved with Ethereum. 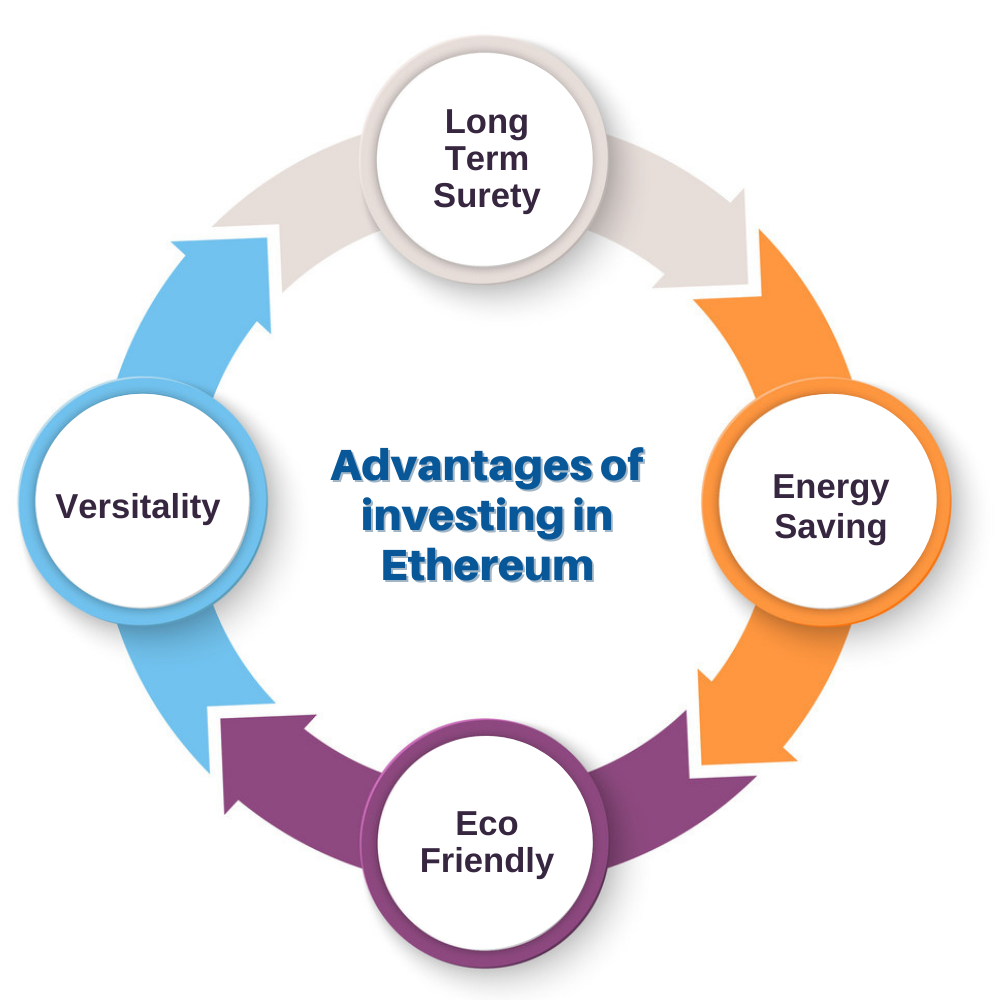 Ethereum, on the other hand, aspires to be more eco-friendly. The technology's creators are currently striving to change the way currencies are mined in order to make the process more energy-efficient. This might provide Ethereum an edge over Bitcoin, particularly among eco-conscious investors. 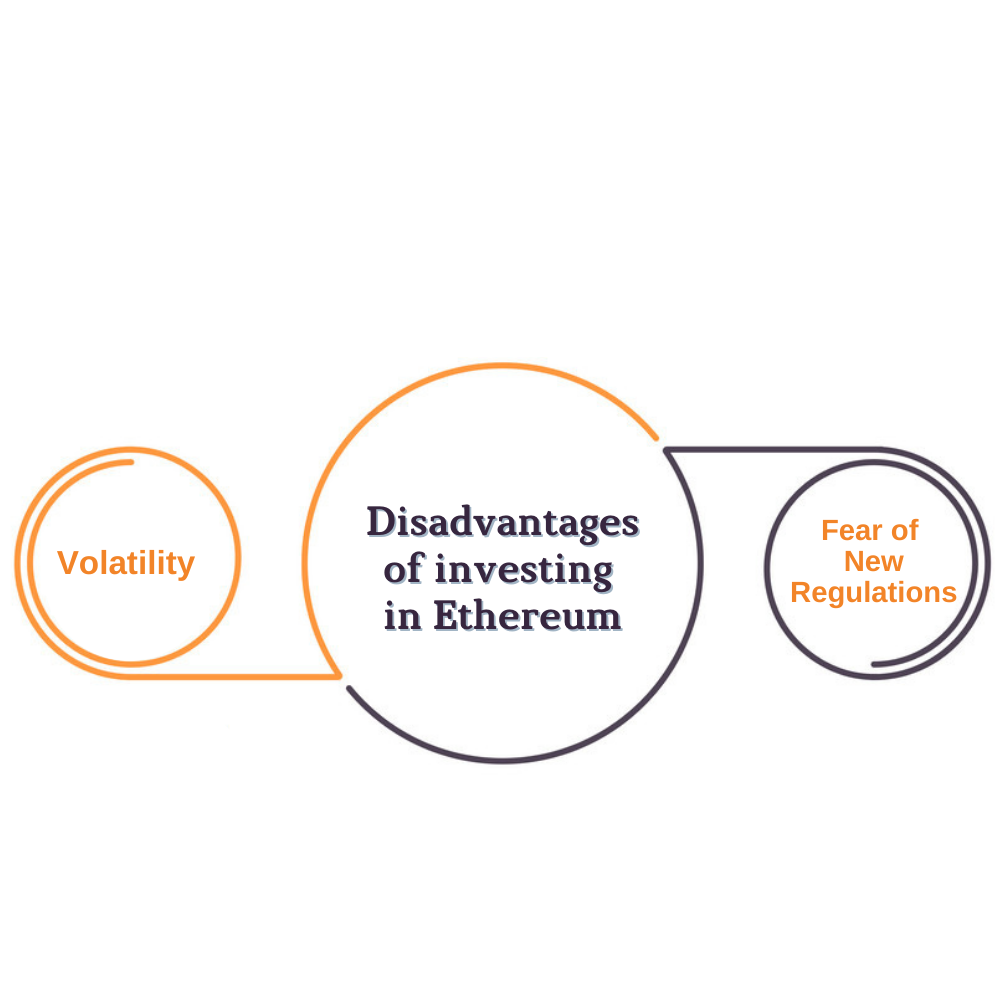 Investing in a managed fund: Managed funds, such as Grayscale Ethereum Trust let you get exposure to Ether and Ethereum without having to buy the coins directly.

Investing in certain equities: Another possibility is to purchase stocks that have some relationship to Ethereum technology. NVIDIA and AMD, for example, manufacture computer chips that are frequently utilized in the cryptocurrency mining process.

What is the best way to get started with Ethereum?

What you want to do with Ethereum and Ether will determine how you get started. Different approaches will be taken by DApp creators, DApp consumers, and Ether investors. DApp is a computer application that operates on a distributed computing system is known as a decentralized application. Distributed ledger technologies, such as the Ethereum blockchain, have promoted DApps.

Long-term investment is the most common strategy to profit from Ethereum. Long-term investing is similar to trading in that you'll keep an eye on the market and convert fiat dirhams into Ether if you think the cryptocurrency's token is cheap.

Ethereum is the clear winner in this contest, and it is a far safer investment than LTC. It's vital to remember that crypto, blockchain, and smart contracts are still in their infancy, therefore any investments should be considered speculative. Don't put any money in the market that you can't afford to lose.

The first thing you'll need to do if you're using a PC is download and install an application called Geth. Geth serves as a conduit between your computer's hardware and the Ethereum network. When it comes to software, CGminer is your best bet if you're mining with a GPU.

The smallest type of work processed on the Ethereum network is a gas unit. On the Ethereum blockchain, validating and confirming transactions takes a particular quantity of gas, which varies based on the size and kind of transaction.

Miners are compensated in fractions of ether for their work validating transactions and adding blocks to the Ethereum network (ETH).