Dhanguard is your optimum solution for all the information regarding Bitcoins.

Dogecoin is a cryptocurrency, or digital currency, that allows peer-to-peer transactions across a decentralized network, similar to bitcoin. Dhanguard also prioritizes in providing key information about Dogecoin and its capabilities as a potential investment.

Dogecoin was founded in 2013 by Jackson Palmer, a product manager at Adobe Inc. in Sydney, Australia, as a way to make fun of the agitation around crypto currencies. Palmer has been dubbed a "skeptic-analytic" observer of emerging technologies, and his earliest tweets about his new crypto currency venture were mocking. He purchased the domain dogecoin.com after receiving great responses on social media. Meanwhile, Billy Markus, an IBM software developer who wanted to create a digital currency but was having problems advertising his efforts, discovered the Dogecoin buzz in Portland, Oregon. Markus contacted Palmer to request permission to develop the software that would power a real Dogecoin. Markus built Dogecoin's code on Luckycoin, which is developed from Litecoin, and had a randomized reward system for block mining until March 2014, when it was switched to a static payout system. Dogecoin is a proof-of-work coin that employs Litecoin's scrypt technology.

On December 6, 2013, Palmer and Markus introduced the coin. Dogecoin's value increased 300 percent two weeks later, on Dec. 19, possibly as a result of China prohibiting its banks from investing in crypto currency. Now that you are aware of the evolution of Dogecoin, let’s unravel more information about it without any impediment.

What do you mean by Dogecoin?

DOGE (Dogecoin) is an open-source, peer-to-peer crypto currency. It's classified as an altcoin and a snarky meme coin. The Shiba Inu dog serves as the logo for Dogecoin, which was launched in December 2013. Despite the fact that it was created as a joke, Dogecoin's block chain still retains value. The technology that underpins it is based on Litecoin. The low price and limitless supply of Dogecoin, which uses the scrypt algorithm, are notable aspects. Dogecoin has a devoted fan base that trades it and uses it as tipping money for social media content. On digital currency exchanges, users can purchase and sell Dogecoin. They have the option of storing their Dogecoin on an exchange or in a wallet.

What made Dogecoin so famous?

Despite severe competition in the crypto currency market, Dogecoin has remained one of the most well-known brands in the industry, with a shockingly high usage rate. Dogecoin has seen more on-chain activity than other of the market's most popular crypto currencies at times. While the crypto currency project's popularity can be credited in part to its fun nature and active online community, it has also made headlines for raising funds for the Jamaican Bobsled Team, which qualified but could not afford to attend the Sochi Winter Olympics in 2014, and for sponsoring NASCAR driver Josh Wise in the same year. Dogecoin's most ardent supporter, though, is arguably the tech industry giant Elon Musk. The Tesla CEO has frequently expressed his enthusiasm for the dog-themed crypto currency, even changing his Twitter bio to CEO of Dogecoin at one point. Dogecoin has become a popular digital currency for social media tipping and micro transactions due to its one-minute block period and minimal transaction costs.

Is it a good idea to invest in Dogecoin?

Yes you can and should invest dogecoin because dogecoin has been around for more than seven years and is a well founded and legitimate form of crypto currency. The major reason why you should invest in Dogecoin is the low purchasing value of it. It is claimed to have a specific goal of developing a payment system free of typical banking fees. So, if an investor invests in the coin, he or she is essentially engaging in a positive project that will result in a profitable investment. Because Dogecoin is of low value, therefore it is also useful for teaching new investors about crypto currency and the fundamentals of supply and demand in the market. The industry is in its early phases, and the coin's worth will rise as a result of the fact that a large number of individuals are joining the market every day, and they first choose something at a low price. Dogecoin is now trading at a low price and is quite popular. As a result, it is a solid investment, but as an investor, you must know when to exit. It is positioning itself as the speedy free transfer use-case rescuer, whereas bitcoin is establishing itself as a digital gold that is supposed to be used as a reserve currency on the internet, with transaction confirmation times of less than a few minutes and each coin worth no more than a few Dirhams.

How to invest in dogecoin?

Dogecoin can be purchased on a crypto currency exchange such as Binance or Kraken. You must create and fund an account with any currency of your choice or cryptocurrency on the exchanges. After that, you can purchase and sell crypto currencies, including Dogecoin. Notably, the popular cryptocurrency exchange Coinbase does not allow Dogecoin purchases.

In addition to traditional assets like stocks, mutual funds, and bonds, certain online brokers, such as Robinhood and TradeStation, allow you to buy Dogecoin. Although they don't have as many crypto currencies as exchanges, Dogecoin is widely available. Once you've purchased Dogecoin, you should transfer your coins to a crypto wallet, just like you would with any other cryptocurrency.

Wallets come in a variety of shapes and sizes, ranging from online services provided by exchanges like Coinbase (though you can't buy Dogecoin on Coinbase, you can store it in your Coinbase wallet), to mobile apps or even a physical hard drive. A private password is used to protect the wallet. There's an added degree of safety against hacks because your coins aren't housed on an exchange.

How does Dogecoin operates?

Dogecoin is a cryptocurrency that, like Bitcoin and Ethereum, is based on blockchain technology. Blockchain is a decentralized digital ledger that stores all transactions conducted with a decentralized digital currency in a distributed, secure manner. The Dogecoin blockchain record, which is frequently updated with all new transactions in the cryptocurrency, is carried by all holders in an identical copy. The blockchain network of Dogecoin, like those of other crypto currencies, uses encryption to keep all transactions secure.

Miners are people who use computers to solve complex mathematical problems in order to execute transactions and record them on the Dogecoin blockchain a mechanism known as "proof of work." Miners receive more Dogecoin in exchange for processing transactions and supporting the blockchain ledger, which they may then keep or sell on the open market. Dogecoin can be used to make payments and purchases, but it isn't a particularly good store of value.

This is primarily due to the fact that there is no lifespan limit on the number of Dogecoins that may be mined, making the cryptocurrency highly inflationary by design. The blockchain compensates miners for their efforts by creating millions of new Dogecoins every day, making speculative price rises in Dogecoin difficult to sustain over time.

What is mining of Dogecoin?

The process of being rewarded with fresh Dogecoins for reviewing transactions on the Dogecoin blockchain is known as Dogecoin mining. Although explained easily it is a very complex task to deal with. Mining Dogecoin is like to playing the lottery. To win the lottery, you must put forth some effort. Actually, your computer (or node) must perform some tasks! This activity entails the confirmation and verification of transactions. Many computers are working on the same block of transactions at the same time, but only one can gain fresh bitcoin as a reward. The node that adds the new block of transactions to the old block of transactions is the one who earns the new coins. Complex mathematical equations are used to complete this. The first node to solve the mathematical problem wins! The newly confirmed block of transactions can then be attached to the remainder of the network. This is how the majority of Bitcoin mining takes place. Dogecoin mining, on the other hand, is distinct from that of other crypto currencies in numerous key ways. The areas which you should excessively consider in all seriousness are mentioned below- 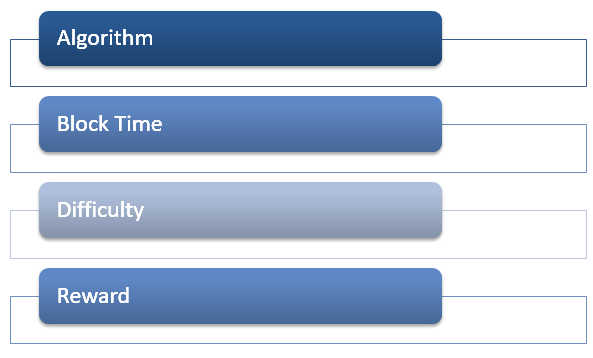 The above mentioned is explained below for a better understanding-

For mining new currency, each cryptocurrency has its own set of laws. A mining or hashing algorithm is the name given to these rules.

This is the average amount of time it takes to check and upload a new block of transactions to the blockchain.

This is a number that indicates how difficult each new block of cash is to mine. You can use the difficulty number to determine your chances of winning the mining lottery. Depending on the number of miners, the difficulty of mining can increase or decrease. The coin's protocol also adjusts the difficulty to ensure that the block time remains constant.

This is the amount of fresh cash that each new block's miner receives.

How can you mine Dogecoin?

Dogecoin may be mined in two ways which is solo (by yourself) or in a Dogecoin mining pool. A Dogecoin pool is a collection of users who pool their processing resources in order to improve their chances of winning the race to confirm transactions. When one of the nodes in a pool confirms a transaction, the reward is split evenly among the pool's users.

Fees must be paid when mining as part of a Dogecoin pool. Furthermore, you will only earn a small percentage of the entire payout when the pool mines a block. Pools, on the other hand, mine blocks considerably more frequently than lone miners. As a result, your chances of getting a reward (even if it is split) are improved. This will ensure that you have a consistent supply of Dogecoin. If you choose to mine alone, you risk having to wait a long period for a transaction to be confirmed due to the high level of competition. It could take weeks, if not months, to mine your first block! When you do win, though, you will receive the entire prize. You will not be required to share it or to pay any costs.

We would recommend joining a Dogecoin pool as a newbie. You won't have to wait as long for your first block of fresh cash this way. You'll also feel like you're a member of the Dogecoin community, which is exactly what it's all about.